the new face of clean

The photo on the left is me, about two months ago, vvvery tired, nauseous, and fatter. I also have peely, dry skin. The photo on the right is me, today. While the most obvious difference to me is the weight loss, the hair is different, too. And I'm wearing makeup in the right photo.

Yes, I've lost 17 lbs since getting pregnant. This happens to me. I'm not sure why, it just does. No need to be jealous. Hang on, once the baby is born and starts nursing, I'll start gaining. This is how whacked out my body is. 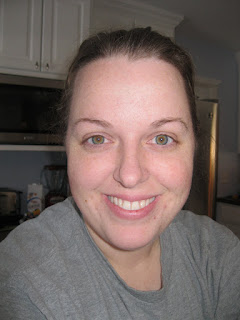 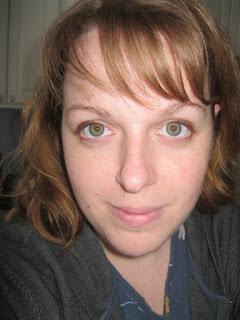 But this post is really about my skin, and my new facial cleansing method. I've noticed a vast improvement in my skin and just have to share. I've been using the Oil Cleansing Method, or OCM, for a little over a week now. I could NOT be happier. I have been using straight coconut oil, though - I don't have castor oil and olive oil is a little strong in odor. Plus, I found out later that coconut oil has some very good for your skin properties.

My skin is usually very dry, and when I use coconut oil to wash my face at night, my skin is hydrated and soft for 24 hours. It also does an awesome job removing makeup! Honestly, my skin is really, really different. I've noticed that some of the tiny lines around my eyes are disappearing. I don't really mind the lines - it means I've been smiling! But at the same time, I like to look as young as I feel.

So thanks to my friend Rebekah for bringing this new cleansing method to my attention - I definitely recommend giving it a try for a week or so and seeing how it works for you! Let me know if you try it!!
Posted by Jenny at 3/29/2011 7 comments:

I've been pondering this concept lately - saying no in order to say yes. Personally, I hate disappointing people, so "no" isn't something I take lightly. However, sometimes saying no now means more yes-saying later. This is how it has been looking for us lately.

1. Saying no to more involvement with projects/service/programs at church.

I realized this with clarity at the end of last summer - one particular incident made me realize that I was so busy doing that I wasn't seeing needs when I was at church or with church family - and that is not what I wanted at ALL. I want to see and meet needs, so that might mean keeping my schedule somewhat open so that I can be available when I'm needed. This might not apply to everyone - I'm sure tons of you can multitask and still be human, with fully functioning brains. That's awesome. My brain tends to be task-oriented. So, we've found a good level of involvement for us and while we do say yes to occasional one-time things, we've decided this year to say no to new ongoing commitments. God has really allowed us to see the benefits of this plan.

2. Saying no to spending now even if the finances are there.

We've been looking for 8 passenger minivans so that we can have 3 kids in easily accessible car seats plus 2 comfortable adults as passengers. (our current rear bench seat will not accommodate 3 car seats) We have a good chunk in our savings set aside for that purpose. However, we don't actually need a new minivan right now - ours is old and sort of decrepit, but it's running fine for the time being. And instead of clearing out that portion of savings immediately, we are able to wait until either the current vehicle gives up the ghost or we find the perfect used van for the best price. Who knows? Maybe God has a different plan for those funds? Maybe His provision of a vehicle is going to look different than we think!? We want to be free to say yes at the right time.

3. Say no to comparing and guilt trips.

This one is hard for me - on the outside, I want to appear as if I don't care at all what people think of me, but that is simply untrue. Every time I think about comparing myself - "oh I'm not as thin, as organized, as creative, as energetic, as good of a mom, wife, housekeeper, as nice, as talented, etc" I've been really trying to make an effort to remind myself of what I know to be true about God and the fact that He made me just the way He wanted me to be. And I don't have to be someone else. So instead of focusing on others, I'm really working at focusing on God and meditating on the woman He wants me to be. That's a big enough job without comparison to others and guilt trips. God's grace is sufficient for my struggles and my failures, and He is gracious to give me days of successes too.

Anything you've been saying no to lately in order to say yes?

Thanks so much for your words of congratulations and your excitement for us! We are thrilled to be welcoming another Muth. I'm due September 10, so I'm 12 weeks along, and still feeling very tired and constantly nauseous. God's grace and Michael's support have gotten me through the worst of it, I HOPE!

The plan for now is to pursue a second home birth but again do ob co-care. I just have to get my rear in gear and actually call the doc and get an appointment. It will be minimum co-care, with an ultrasound to check out all the internals and make sure there is not an obvious reason to give birth at the hospital.

Aaron is convinced we are having a girl, and he wants to name her. Huh. Interesting. (Not gonna happen) He says he knows that God decides what we are having and he will be okay with whatever we get. But he still thinks it will be a sister. Evan doesn't really seem to get it, but we have 6 months. Ha!

People have been wishing a girl child upon me and I will tell you that I am equally terrified of having 3 boys as I am of having a girl added to our family. I'm sure this has something to do with #3 being the first situation where we are officially outnumbered. I'm hoping it will help that the kids will be a little older (5 and 3).
Posted by Jenny at 3/02/2011 7 comments:

Jenny
Mom of four on earth and two in heaven, sorting out life and soaking up the grace of God. We're always in the midst of serious home renovations and trying figure out how to enjoy the journey! Join me as I recount all of our extraordinary blessings!